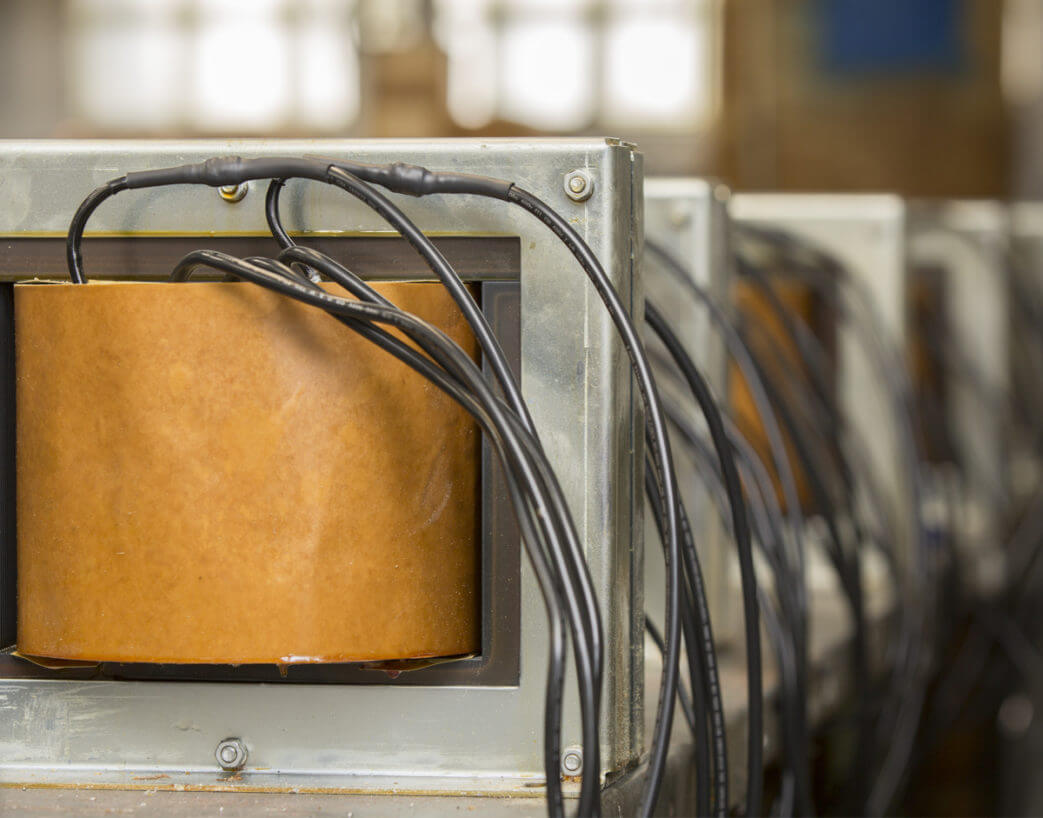 An iron-core transformer for use with audio-frequency currents to transfer signals from one circuit to another. They are used for impedance matching to permit the maximum transfer of power.

A transformer with mounting holes on either the brackets or frame can be attached directly to the assembly, as shown below. Chassis-mount transformers may be large or small.

Also called an impedance coil. An inductor (reactor) is used to limit or suppress the flow of alternating current without an appreciable effect on the flow of direct current.

A shield placed around a high potential point to redistribute electrostatic lines of force and prevent corona.

The movement of electrons through a conductor. Current is measured in amperes.

A transformer, intended for measuring purposes, designed to have its primary winding connected in series with a circuit carrying the current to be measured or controlled.

The maximum voltage a dielectric can withstand without rupturing. It is usually expressed as volts per mil. It is also called electric strength, breakdown strength, and electric field strength.

The voltage produced in a coil as the number of magnetic lines of force (flux linkages) passing through the coil changes.

1. The process of charging an object electrically by bringing it near a charged object.

2. Capacitive induction of interfering signals over an air gap separating an instrument (e.g., from its wiring or housing).

A shield that prevents electrostatic coupling between circuits but permits electromagnetic coupling.

A protective coating of cured plastic is placed around delicate electronic components and assemblies. It is identical to potting, except the cured plastic is removed from the mold. The plastic, therefore, determines the color and surface hardness of the finished part. The molds may be made of any suitable material.

An insulating plastic used for encapsulating or embedding electronic equipment.

A transformer consisting of a coil wound around a core made from iron and/or other oxides has been sintered into a magnetic material with high resistivity (ferrite).

A laminated transformer designed, so the core reaches a point of magnetic saturation. Ferro-resonance occurs when the transformer core is so strongly magnetized that increased winding current provides virtually no increase in magnetic flux. Because of this, the voltage output remains constant even when there are significant variations in voltage input. The core saturation in resonant transformers creates an energy reserve in its resonant tank circuit, which may reduce incidents of transients and surges.

Typically an iron-core coil allows direct current to pass while opposing the passage of pulsating or alternating current.

Abbreviated H. The basic unit of inductance in which an induced electromotive force of one volt is produced when the current is varied at the rate of one ampere per second.

A transformer that transfers energy from an alternating voltage source to the input of a circuit or device. It also usually provides the correct impedance match.

A number of electrical elements comprising a single structure that cannot be divided without destroying its stated electronic functions.

A coil in which iron forms part or all of the magnetic circuit, linking its winding. In a choke coil, the core is usually built up of laminations of sheet iron.

A transformer in which iron forms part or all of the magnetic circuit, linking the transformer windings.

An iron core for a coil, transformer, armature, and so forth. It is built up from laminations to minimize the effect of eddy currents. The sheet iron or steel laminations are insulated by surface oxides or by oxides and varnish.

A single stamping of sheet material used in building up a laminated object such as the core of a power transformer.

The flux travels from the north pole, through the circuit components, and back to the north pole. In a generator, the magnetic-circuit components include the field yoke, field pole pieces, air gap, and armature core. The magnetic circuit may be compared to an electrical circuit, with a magnetomotive force corresponding to voltage, flux lines to current, and resistance.

The magnetic induction in a material. An electromotive force will be induced in a conductor placed in a magnetic field whenever the magnitude of the flux changes.

A transformer used for matching impedances.

They are typically written as the Greek letter µ.

It is symbolized by the Greek letter omega (Ω). The unit of resistance. It is defined as the resistance, at 0°C., of a uniform column of mercury 106.30 cm long and weighing 14.451 grams. One ohm is the value of resistance through which a potential difference of one volt will maintain a current of one ampere.

A sensitivity rating for voltage-measuring instruments. (The higher the rating, the more sensitive the meter.) On any particular range, it is obtained by dividing the resistance of the instrument (in ohms) by the full-scale voltage value of that range.

A transformer used for coupling the plate circuit of one or more power tubes to a speaker or other load.

A non-powered component generally presenting some loss (expressed in dB) to a system.

A transformer used for raising or lowering the supply voltage to the various values required by the load.

Abbreviated pri and symbolized by P. Also called a primary winding. The input transformer winding carries current and typically sets up a current in one or more secondary windings.

The voltage is applied to the terminals of the primary winding in a transformer.

A transformer designed to pass pulse currents and voltages with the least possible changes in wave shape or to be used for generating pulses in a blocking oscillator.

A transformer for adjusting the voltage or the phase relation (or both) in steps, usually without interrupting the load. See Ferro-Resonant Transformer.

The effective value of a varying or alternating voltage. The value would produce the same power loss as if a continuous voltage were applied to a pure resistance. In sine-wave voltages, the RMS voltage is equal to 0.707 times the peak voltage.

The transformer output winding where the current flow is due to inductive coupling with the primary winding.

The voltage across the secondary winding of a transformer.

The winding on the output side of a transformer.

The connecting of components end-to-end in a circuit to provide a single path for the current.

A circuit in which resistances or other components are connected end-to-end to the same current flows throughout the circuit.

The most simple transformer design, consisting of one set of conductors, wound around a single core.

An equal division of a winding that will allow series or parallel external connection of the divided winding (four external leads) of a servomotor.

A square or rectangular-shaped periodic wave that alternately assumes two fixed values for equal lengths of time, the transition time being negligible compared to the duration of each fixed value.

A transformer in which the voltage is reduced as the energy is transferred from its primary to its secondary winding. The result is an increase in current.

A transformer in which the voltage is increased as the energy is transferred from its primary to the secondary winding. The result is a decrease in current.

A method of mounting a transformer on a printed circuit board by soldering the component directly on a “solder pad” on the board. A transformer made for surface mounting has flat pads or “feet” to solder to the circuit board, as shown below.

An iron-core choke coil is designed so that its effective inductance varies with the current passing through it. It is used as the input choke in some power-supply filter circuits.

A coil winding with connections brought out from turns at various points.

A winding added to a transformer, in addition to the conventional primary and secondary windings, to suppress third harmonics or to make connections to a power-factor correcting device.

A sine-wave component having three times the fundamental frequency of a complex wave.

A transformer that consists of three AC voltages with a phase differential of 120 electrical degrees between any two adjacent voltages or currents. The three separate outputs are from a single source.

A transformer with the primary and secondary coils wound around a ring-shaped core, typically made out of silicon steel, permalloy, or a sintered ferrite.

A coil wound in the form of a toroidal helix.

An electrical device that, by electromagnetic induction, transforms electric energy from one or more circuits to one or more other circuits at the same frequency but usually at a different voltage and current value.

A unit of apparent power in an AC circuit containing reactance. It is equal to the potential in volts multiplied by the current in amperes without considering phase.

True power delivered to the load may be lower than VA (apparent power) in the output circuit.

A conductive path, usually wire, inductively coupled to a magnetic core or cell. Windings may be designated according to function (such as sense, bias, drive, et cetra).