The Difference Between Inductors and Transformers 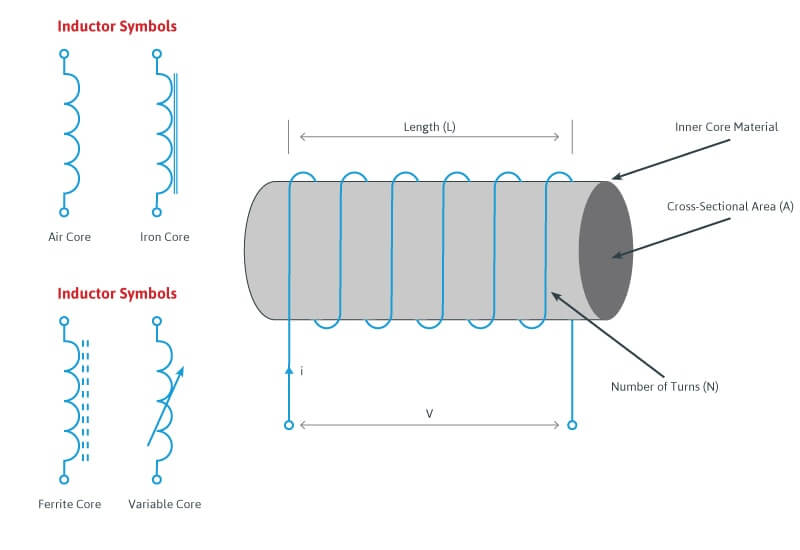 Transformers and inductors seem very similar in a visual and construction sense. However, they have differing applications and have their own unique design and construction elements. Below is a brief summary about them both, which provides a little guidance to the differences.

An inductor (also called a choke or reactor) is a passive two-terminal electrical component. It is made of an electrical conductor for example, a wire, normally wound into a coil. A current flowing through it will store energy temporarily in a magnetic field in the coil. If the current flowing through changes, this creates a voltage (Faraday’s Law).

An inductor is characterized by its inductance, the ratio of the voltage to the rate of change of current, which has units of Henry (H). Inductors have values that range from 1 µH (10−6H) to 1 H. The inside of most inductors is made up of a magnetic core made of iron or ferrite, which increases the magnetic field and therefore the inductance. Inductors are widely used in alternating current (AC) electronic equipment. They are used to block AC while allowing DC to pass (chokes). Electronic filters need chokes to separate signals of different frequencies, and when combined with capacitors they make tuned circuits.

At Shreejee we manufacture many different styles of inductors using a variety of techniques from automated to hand crafted methods. There are toroidal winding machines, machines capable of winding copper strip and facilities to wind air coils.

Essentially, a simple transformer consists of two coils of insulated wire. In most transformers, the wires are wound around an iron-containing structure called the core. One coil (the primary), is connected to an input source of alternating current that produces a constantly varying magnetic field around the coil. This in turn, produces an alternating current in the other coil. This coil (the secondary), is connected to a separate electric circuit, to give an output.

In an autotransformer, there is only one coil with both circuits connected to it. One circuit contains a larger segment of the coil (has more turns) than the other.

A large variety of core and conductor materials are used to specifically suit the power, frequency and insulation requirements of the transformer. Core materials include iron, ferrite, iron powder, amorphous. They are in the full range of shape styles, such as E core variations, laminations, RM cores, etc. Conductor material is usually copper, but can be in the form of enamelled wire, copper strip, high voltage insulation wire and litz multi-stranded wire.

Transformers we have produced are used in many applications, such as SMPS for LED lighting, mains power conversion for commercial and medical uses and high voltage (HV) transformers for applications such as electro-static spraying.

We offer a bespoke service to our clients, working to their design requirements. All of the products which we produce are unique to the individual project. So if you have a project which you wish to discuss with us, please raise a Request for Quote.